Developing intuition is something anyone can do, just as anyone can develop muscles with the right training.

I define intuition as the ability to understand something instinctively, without the need for conscious reasoning.

In later articles, I want to write about how we can instinctively know things, but here I’d like to talk about developing intuition in fiction and reality—about how one woman developed hers.

Lucy Thomson began as an intuitive tarot reader—and it is the study of tarot that gives her a secret power; one that she develops throughout the stories.

What is the difference between being intuitive and being psychic? 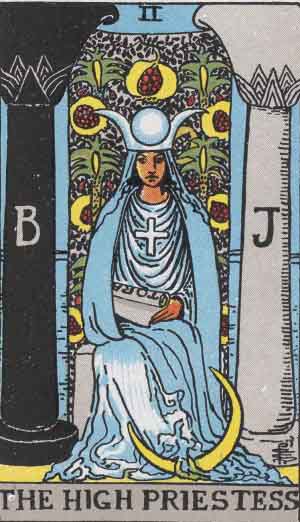 This is the card I drew for Lucy when I was imagining her character. The High Priestess is the card of intuition—she has access to the inner mysteries, as Lucy begins to develop in the stories.

Another word that comes up in the stories in relation to Lucy, is empathy. This commonly means the ability to understand and share the feelings of another. However, for some people (in the real world) it means a real and literal feeling of another’s feelings. In my stories, I take it to mean the latter.

Some people can feel the physical pain of others, and some of these people can locate physical problems in others. For many people, the empathy is with emotions. This is the sometimes painful experience of actually feeling the emotions, whether wonderful or toxic, of other people.

There are many types of empathy, but with Lucy it’s mainly the literal feeling of emotions, but she also connects with all life forms, including animals and plants.

Although I don’t mention Thomas much here, he’s an environmental empath, and he feels physical distress when the environment is devastated.

As I mentioned earlier, everyone has intuition, even if, for many people, it’s ignored and therefore underdeveloped.

The key to developing intuition is to trusting that it is true, listening to it, and acting upon it when it comes. At first, the results can be underwhelming, but don't worry, just keep going. It's sometimes be better not to tell people who are not open to these ideas that you are acting on intuition (or a hunch) as it will often lead to ridicule from those who are too closed to understand. Trusting yourself and listening is an important part of developing intuition.

Certain tools help in developing intuition, and as I mentioned in an earlier article (Tarot & Me) the Tarot is one of these tools. 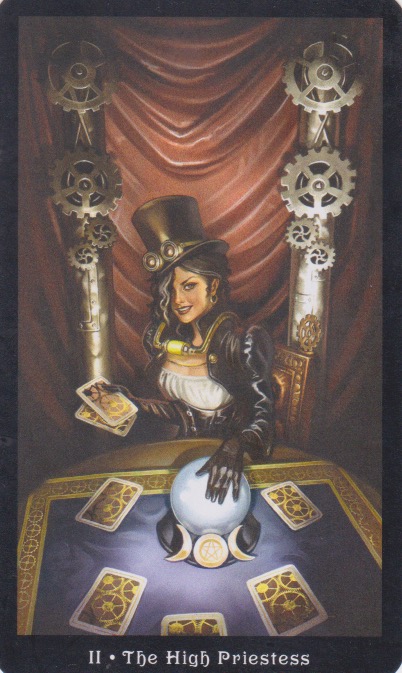 Lucy begins the story as an intuitive tarot reader in London. She ends up as much more than this. Below, I’ve given some extracts from Blue Prometheus and The Darkling Odyssey, showing her progression, first as she uses the Tarot, and later as she uses a very special oracle deck.

This extract is from the beginning of Blue Prometheus, while they are still in London.

Lucy introduced the tarot deck and went through the meanings of some of the cards. There were the major and minor arcana. The major arcana each had a picture; the minor arcana consisted of the court cards and the numbered cards. “Intuition comes from within, not from the cards themselves. They’re just tools to help us.”

Thomas wondered how anybody could believe that tarot cards could predict your future. But the class was utterly captivated by Lucy and her colourful cards.

Thomas blocks himself here, as he does for much of the story. It’s not until he believes that magic is possible that he gains access to it. Developing intuition is one of his first tasks, and one that Lucy and Aina both help him with.

Lucy is more open and naturally ahead of him intuitively. And she has a tool to practice with.

Another extract, where Lucy stresses to Thomas the importance of developing intuition

Lucy pointed to the third card. “This card shows you what action you should take to overcome the difficulties you face.” She turned it over. There was a picture of a magician with one arm pointing into the air and the other pointing to the ground. “You need to overcome the obstacles in your path by developing your intuition. You need to understand the unseen forces within the universe. Trust your higher self.”

He looked around and saw several people nodding at the advice, but he had no idea what she was talking about. “Higher self?”

“Your imagination or intuition. Believe in what your inner self tells you.”

Thomas nodded; although he didn’t believe in higher selves, he didn’t want to upset Lucy. “What about the final card?”

“The last card shows the most likely outcome.” The class waited for Lucy to turn over the card. Even Thomas felt a little tense, which he knew was ridiculous.

“Well, let’s see the future.” She turned over the final card. The class stilled. Death rode a white horse and around him lay dismembered bodies. The card disturbed Thomas a little, but he reminded himself that it was all just superstition. Lucy began to speak when a brick shattered the shop window.

Read Blue Prometheus to find out what happened next :)

Lucy and Aina are in the Tower—a bleak place built with stone infused with the souls of the dead. And Lucy has a common type of intuitive experience: she just knows something but doesn’t understand why it should be, just that it feels right.

They’re fighting for their lives, and have just fought two ice demons—genetically designed reptiles which form elite killing squads for the Empire. One is dead, the other is unconscious.

Aina walked over to the dead ice demon and bent over to look at its wounds. “It serves it right for using a gun like that.” She removed the automatic weapon from its claws. “I should kill this one, too.”

“I’m not sure, but I think you shouldn’t kill her.”

“Her?” Aina looked closer. Lucy was right; this one was slightly smaller than the other and was bleeding from its face. “It’d kill us.”

Lucy had intuitively known that it was wrong to kill the demon. Had she done so, then the events of book 2 would have been very different.

In book 1, Lucy has her tarot cards to help her tune her intuition, but somewhere between the end of this book and the beginning of the second, she loses them. However, she eventually gains a very special oracle deck.

These work on similar principles to tarot, but are usually shorter, and are created in any way the designer feels best. Although her magical oracle deck couldn’t exist in our world, and I played with the magic for fun, the principles behind its use, and the way it helps in developing intuition, are the same as they would be in this world.

Here’s an extract from The Darkling Odyssey, where Lucy first interacts with her oracle deck. She is a prisoner…

…she noticed something in her pocket. Reaching in, she took out the oracle deck, remembering that the goddess had said something about it remaining hidden from prying eyes. As she turned them over, a card jumped out. Turning over the card she saw a wolf staring at her.

“Were you speaking to me earlier?”

“Who else? And I lent you my fleas, too.” She involuntarily scratched herself. “They’ve gone now. Mostly.”

“Who are you?” Lucy had used oracle cards before but had never imagined cards like this.

“And what do you represent in me?”

“The will to fight and survive. Shuffle the deck and ask to be shown a way out. Help is in the cards.” Lucy wanted to hug the animal in gratitude. The wolf’s head seemed to reach out from the card and nuzzle her hand; his nose was wet. Then he was gone, and again he stared out at her from the forest on the oracle card. She smelt the back of her hand where his nose had touched; there was a faint smell of wolf.

“What type of magic does this oracle possess?” she asked herself quietly.

“Shuffle,” the wolf whispered in her mind.

The man and woman were talking outside her door, and this time they were going to force her to do what they wanted. She quickly shuffled, and as she did, she repeated the question out loud: “How can I escape this place? Show me a way out.” As she shuffled, she was drawn to one of the cards. She pulled it out. A brightly coloured monkey stared at her. “What are you telling me?”

The picture moved, and the monkey swam in a forest pool. Other monkeys were sitting on a log. The monkey grabbed the tails of two of the other monkeys and pulled them into the water. Jumping out it raced up the tree and threw fruit down at the others. Then it sat back on the branch and howled, and it was loud. Keys jangled outside. Lucy quickly put the card face down on the top of the deck, and the sound stopped. What was the message? To play? It didn’t make sense. She was about to put the deck away when the card moved.

“What?” she asked, nervously turning it over.

“I don’t want to play,” Lucy said frantically as the door started to open.

“Monkeys know the value of play.” Lucy jumped as the brightly coloured monkey reached out of the card and pulled her nose. The door was opening, and she had no idea what to do. She didn’t want them taking her oracle deck.

“Hide,” she whispered. The monkey just stared at her. “What kind of oracle card are you?”

“One that helps you release your natural magic more easily.” Then the monkey howled with strange laughter and leapt from the card, climbing the door as it opened. “Are you real or a part of me?” she asked.

Lucy had no idea. She put the cards away, and they seemed to melt into her pocket, almost as if they weren’t there. But the bright red and orange monkey remained.

The monkey leapt onto his head and screeched. The man cried out and fell to the floor, hitting his head against the wall. It stole his knife. “Give me that back.” The man chased the monkey down the corridor…

And later, Lucy asks the oracle a question of importance to her…

“Can you kill the sorcerers for me?”

“The power must come from within you. But we can advise.”

The true purpose of oracle decks, she thought as they walked down the street.

In my next article, I want to show how Lucy talks to animals.