So, what is intuition? In Developing Intuition, I defined intuition as the ability to understand something instinctively, without the need for conscious reasoning.

I’d like to add that intuition is a spiritual insight or immediate spiritual communication, and it can come in the form of just knowing things, in predictive dreams, in an image suddenly appearing of a future event (precognition), and other ways.

I understand that for some people, the above statements will make as much sense as saying that Santa Claus squeezes down the chimney every Christmas with a bag of presents.

But for those who have developed their intuition, these definitions make sense.

But how can it be?

How Does Intuition Work?

According to an objective, scientific view of the world, it probably shouldn’t work. And some would deny its existence.

Neither should many other things work:

Many people know from experience that they do work, and sometimes incredibly effectively, and for people with well developed empathy, living in the world can be literally painful.

I write about these, and all kinds of things that may be considered strange, on this website; things that should not be possible according to the common, scientific view of the world.

So, what’s happening? Unfortunately, there are no universally agreed on terms, so the words I use are (sometimes) used differently by others. Again…

Another way of looking at it is through the idea that the universe is not an objective reality (as science currently sees it) but a greater subjective reality.

If the universe is subjective, literally being made up of mind or consciousness, then intuition, and many other phenomena, can be more easily explained.

In this case, all is one, and all is connected. If we are connected to all life, then the ability to know things that we apparently shouldn’t know, begins to make sense.

It’s a way of seeing the universe.

If we are all aspects, or parts, of a whole, all connected in a sea of consciousness, then the world will appear quite different, and our experience of it will be different, too.

For one, it’s harder to hate part of yourself; it makes no sense for the hand to dislike the knee. 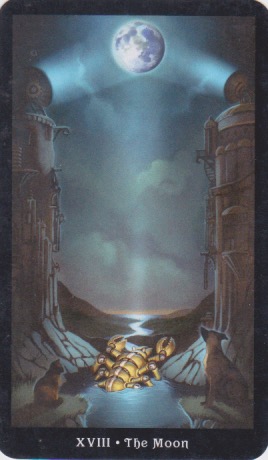 What is Intuition? Meditation on the Moon tarot can bring some answers. Steampunk Tarot (Moore & Fel).

The answer to the question of what is intuition makes more sense from this subjective reality perspective.

The term subjective reality is not perfect because some people use it in a different way, but it’s the best I can think of at the moment.

I can’t prove this is true, of course. No one can. Neither can anyone prove that the objective scientific view of reality is true because it’s always possible that another layer of reality exists beyond.

In practice I switch between the two perspectives depending on the situation. Sometimes an objective perspective works best, but not always.

Here’s a short extract from the beginning of the prologue of Blue Prometheus, showing how a thought disturbed the universe, and so set in motion the events of this trilogy:

A thought disturbed the darkling sea. From beyond our universe, it rippled through the millions upon millions of galaxies and on through the many planes of the universe that lay together so closely intertwined that few could distinguish between them.

The thought vibrated through millions of lives, unseen but not unfelt. Plants withered, animals lashed out in fear, and the moods of man changed. The emotional states of those unaware of the darkness within fluctuated wildly...

The thoughts of a powerful entity created a series of changes in the multiverse.

Intuition refers to the more passive, listening part, above I was referring to the active, thinking part. Both work together, but both need training.

It’s worth bearing in mind, that people who rely a lot on their intuition, but who seldom attempt to explain it, can sometimes struggle to explain it to others, which can then lead to ridicule.

I hope that this article can help a little towards explaining the questions of what is intuition, and how does intuition work. I’ll end with a quote:

A final note. I found this article a few days after publishing mine. It's from Scientific American, and although they approach it from a very different angle, the conclusions point towards the same idea: that the universe is mind. Read the article here, Physics is Pointing Inexorably to Mind.