Clapton Pond—Inspiration for the Beginning of Blue Prometheus

I chose Clapton Pond as the setting for the beginning of my first novel, Blue Prometheus, because I needed a body of water in London big enough for a spaceship (disguised as a sailing ship) to land on, but I didn’t want anywhere too famous or too big. The Serpentine was too big and the Thames too wide. Clapton Pond was perfect.

As far as I know,  the area did not suffer from rioting in the London riots, although nearby areas did. 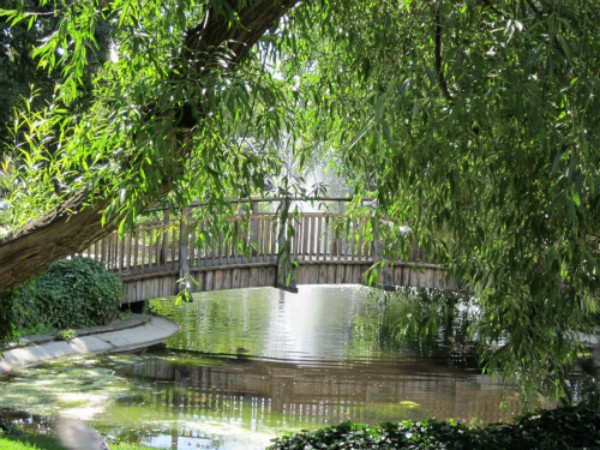 The bridge where Thomas and Lucy escaped from the rioting

I was visiting England when rioting broke-out in London, and I knew that the riots would make an interesting situation for my fantasy. A few days later I was on a red number 56 up to Clapton Pond, and I spent the morning wandering round the small park, imagining what would have happened if a spaceship had landed on it, and taking the photos you see here.

As I walked into the park, I noticed the vandalized noticeboard, but when I read it, I knew I had to include one of the details: “1900s to 1950s.

Lucy comments on the swans on the water (from the 1900s to the 1950s) as she enters and is pleased they’re not there anymore because she’d feel concerned for their safety.

The park has a sense of calm within the busy London streets, and I imagined the heroes of the story temporarily forgetting the chaos and the unfolding events around them. The bridge where Thomas and Lucy waited is partly concealed by a beautiful weeping willow and was a good place to speak, while the events unfolded.

Many of the events in the novel did occur: the polite queues outside shops, where looters waited their turn to steal flatscreen TV’s, DVD players and other electrical appliances. I read sad stories, which I didn’t include in the final draft, for example, a handmade wedding dress shop that was looted—just for fun. 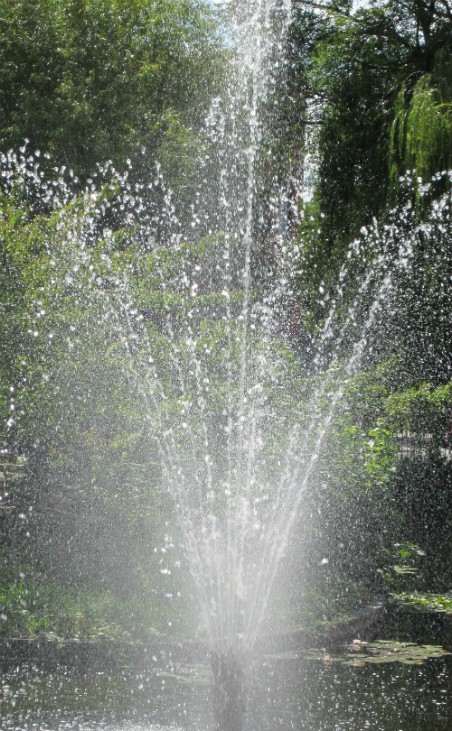 I really liked the fountain in the middle of the small park, and the island with all the little birdhouses, and I knew they had to play a part in the story—as would the pigeons flying around the pond.

Here’s an extract from Blue Prometheus (the end of Chapter 2), just after the spaceship takes off from the park:

“A blinding flash of light illuminated Clapton Pond. It was followed by darkness. Around the pond thousands of people were blinded. Several minutes passed before their sight returned. When it did, they looked around in confusion. The ship had gone. The island in the pond, with its little wooden houses, was as it had been before the sailing ship had appeared. A pigeon casually flew around the small island as if nothing had happened.” 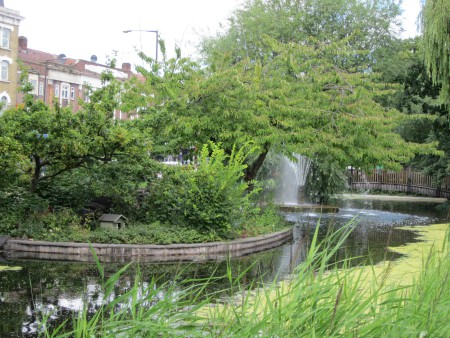 Birdhouses on the island.