This article is about tarot and me—why I read tarot, and its influence on my fiction.

I’ve always been interested in metaphysical subjects—those attempting to discover the nature of reality.

I studied psychology, but that only goes so far, and it’s taken the direction of the hard sciences—a mistake because it misses much of human experience. I’ve maintained my interest in the nature of reality: in reading, thought and experience. I’ve read on many metaphysical subjects (traditional and esoteric philosophy), but it’s been my personal experience that has led me deeper down the rabbit hole. 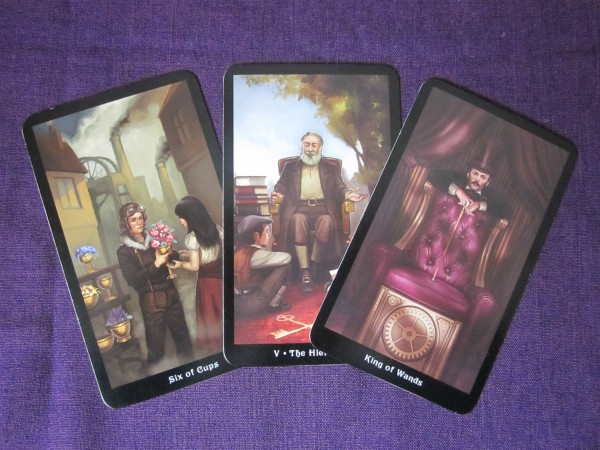 A tarot spread I did as I wrote this article.

I’ve had an interest in tarot for decades. The colourful images and the rich symbolism of the cards have always attracted me, as has their effect on my imagination. But just over a year ago, I decided to study the tarot in depth.

For the past year and a half have been studying tarot more deeply than I’d ever done before, I’ve read for hundreds of people and had interesting and moving experiences when reading for complete strangers.

The quote from Nietzsche is probably the most poetic way of explaining why I’m doing something that some people will find inexplicable.

My intuitive experiences are really one of my motivations for going deeper into tarot. Everyone has an intuitive sense, of course, but for some it’s sleeping, and for many others it’s awake, but ignored, and therefore undeveloped.

Knowing things intuitively is the heart of tarot, and it’s been something that I’ve experienced all my life—sometimes very dramatically, although I’m not yet ready to share the most intense and personal experiences I’ve had, but I can share some everyday ones.

A commonplace intuitive experience that many people have without even labelling it as intuitive is having a feeling to go somewhere, sit next to someone, or take a particular action. If you follow your intuition in this situation, it’s certain that there’s a purpose—either in helping yourself or another.

I want to intentionally pick a small, everyday type of experience. Once, I walked past a bookshop and had the feeling that I should go inside, even though I had no plan or previous intention to do so. Inside, I saw a book I’d been looking for for years, which I bought. This type of experience happens quite often to most people, and it might not seem special, but if you develop these types of experiences, more will come.

Another example. I was at home when a mental image of a friend unexpectedly came to my mind. Minutes later she arrived at my house. This is not such a rare experience—many other people have experienced this type of thing.

Tarot is about developing this intuition of knowing things; the cards themselves are beautiful, but just cards.

An Example from Tarot

I gave a tarot reading to a woman in another country. She asked a question, which I answered, but I kept noticing the red boots in the image, and I kept having the feeling of her husband being elevated or being above the ground. I asked her about this, and she immediately replied, telling me that her husband had a favourite pair of red boots, which he alway wore to work, and that he worked as a tree surgeon, therefore spending much of his time raised above the ground.

Similar stories are common from working with tarot (and will be completely unsurprising to anyone with a developed intuitive sense). Knowing things, which from the perspective of an objective reality we shouldn’t be able to know, is an everyday experience for me, and anyone who is also developing their intuitive sense.

Intuitive and Psychic Abilities in my Fantasy

In Blue Prometheus, Lucy begins the story giving a tarot reading, and she continues to use the tarot throughout the story. In The Darkling Odyssey, she gains an oracle deck (something similar to a tarot deck), which has certain magical qualities that can’t exist in real oracle decks, but the fundamental principles behind using the deck is something I take from real intuitive work.

I’ll write about many of the topics I mentioned today in future articles, discussing my experiences exploring intuition, subjective reality, and others topics (as they relate to my fiction).

If you want to keep in touch, you can sign-up to my newsletter and get a free short stories (Young Aina and The Huntress of Prometheus).