Despite the downpour, heat flushed through Hal’s body as the row of wooden shacks burnt. Displaced people, many of whom he knew, huddled by the swollen river and watched everything they had burn whilst glancing anxiously at the banker, the politician, and their guards—many of whom held swords and burning torches. Hal’s face reddened in anger as he watched the scene. 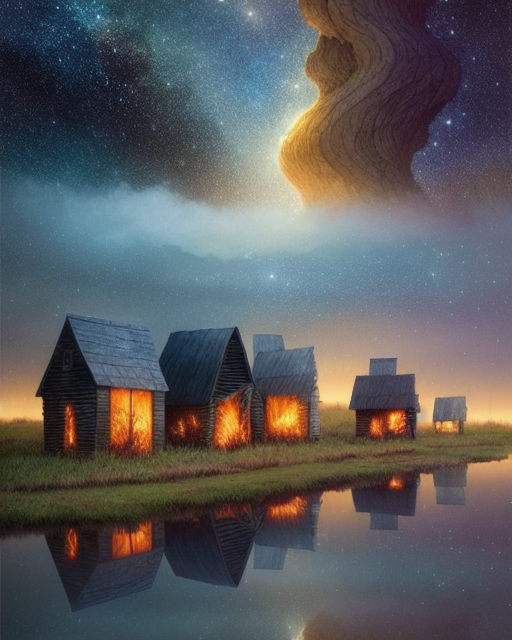 The burning of the village.

“It’s not right, Gwendolen,” he said. His coracle bobbed up and down in the river. “Maybe it’s time we returned to your world.” Gwendolen had silent ways of responding. He knew she approved. The rain worsened, and the Silver River now lived up to its name—becoming a silver grey from the mud it carried from the mountains.

Turning away, he returned to his chair on the veranda. He knew  that his home was no different from the others, except that it stood alone and was surrounded by garden. He knew, too, that he could be next. The only thing in his favour was his ability to cross the Silver River in all weather—a skill those in power sometimes needed.

He sat, watching the rushing water as the hard rain hit his wooden roof. He was aware that from the burnt-out shacks, new buildings would rise, bringing wealth to some. Politicians said it was the price of progress. The far side of the river bordered the Old World—it was not so civilized, and although it was less than sixty yards to the opposite shore, he could hardly see it for the storm. A flapper bird disturbed his thoughts.

The politician, banker, and several guards stepped into his garden. Hal wondered whether they’d fire his home, too. But there had been no notice, and these people liked their laws.

“Boatman,” Ottoline Pease said. He’d never spoken to her before, but she was well known in the area.

The woman appeared a little disconcerted, but she continued. “We want passage to Lyme Pale.”

Hal knew she wanted to push back the frontier, and that the banker was greedy. He wanted properties there, too. Hal was reluctant to help. “It’s dangerous.”

“If you won’t cross on a day like today, then what use are you?” the banker asked.

“Investing in a proper ferry would be wonderful, Mr Tilley,” the politician said.

“Only Gwendolen can cross a swollen river,” Hal said, understanding that his home would burn by the evening if he refused.

“Is that what you call it?” Pease asked, wrinkling her nose at the coracle.

Tilley stared around his garden: at the dark hopping moths, and the plant growing through a hole in the floor of the veranda. Hal wondered if this man unconsciously sensed the magic of the Old World in his home and garden. Hal was sure he feared it. He believed that one of the reasons this man, and others, had hunted the last of the old creatures from this part of the world was an unreasoning fear of the unknown.

“There’ve been sightings of something strange in the river,” Tilley said. “What do you know?”

“I know nothing,” Hal said, glancing at his coracle. The people here are superstitious. They see faeries in the fields and hobs in their homes. Pay no attention.”

Two of the dispossessed people wandered up to Hal’s place. The old man, Benjamin, and his teenage grandson—Hal knew them well, and his heart was heavy at their suffering. “We want to cross, we have nothing here,” Benjamin said.

Hal sighed as he gestured towards Gwendolen. The coracle could carry eight people—ten at a squeeze. “Four of you,” he said. The guards made him uneasy. The banker, politician, and two guards got in.

Hal was pleased when a local bargee ran along the path.

“Hal, I’m glad I caught you. The barge won’t be sailing for a few days, and I want to get back to my family tonight.”

“I say who gets in!” Tilley repeated.

“It’s handy having a boatman’s help,” Hal said. He passed Sam the spare pole. “And the river’s rising.”

Pease glanced at the river. “He might be right, Mr Tilley.”

The banker gave a short nod.

Hal rested his hands on the old man’s arms. “Jump on board when I start poling,” he said quietly. He turned to the boy. “Both of you.”

As Hal poled the boat from the shore, Benjamin and the boy rushed through the shallow water. The boy pushed his grandfather into the boat and quickly climbed in after him. “Throw them out!” Tilley yelled, his face reddening. But Hal stopped poling, and the coracle moved downstream.

“I’m the boatman, and I say who comes. An old man and a boy are hardly a threat.”

“Leave them,” Pease said watching the boat move away from her destination.

Hal poled hard, straining every muscle in his fit wiry body, and, with Sam’s help, he brought the coracle back on course. Soon they were poling through the deeper water.

Gwendolen kept her course, even as they reached the faster central water.

“How can you keep the boat so steady?” Tilley asked.

Hal had heard Sam tell his stories in the inns of the towns on both sides of the river, and he knew each tale. He also knew that the man had never sailed further than Johnby Station, twenty miles downstream, yet he enjoyed the tales each time he heard them. One of the places in Sam’s stories was the village where he’d first met Gwendolen.

Sam began. “I’ve sailed the Seven Seas of Ra, from the Lakes of Purple Dreams where women can talk to animals, to the Deserts of Sar where men can magic common mould to gold…” He continued while Hal steadily poled the coracle across the river.

Pease laughed, breaking the spell. “How can grown men believe in magic?”

Hal knew she’d regret her interruption. “What will you do now?” he asked Benjamin.

There was a moment’s silence, and the politician, at least, had the grace to look contrite. The teenage boy pointed at the banker. “He’s sucked us dry! We’ve nothing left!”

“Get a job!” Tilley said. Lightning forked over Lyme Pale.

“We need rules and laws for our own protection,” she said. But seeming to lose heart, she finally shut up.

They passed the islet with its solitary tree. Hal stopped poling for several seconds, but Gwendolen continued to cut through the current.

“How does it do that?” the banker demanded.

“Momentum,” Hal said, appearing to pole harder, even though, with the deluge, his pole hardly touched the bottom. Gwendolen sensed his distress and rocked in the water. He patted the coracle, hoping to calm her. They were only twenty yards from the shore.

Tilley leant over the edge of the coracle, looking for something in the water, then he turned and flashed a smile at his bodyguards. “We have a trophy!”

“Gwendolen!” Hal whispered. His mouth felt dry as they neared the shore.

Tilley whispered to his guards who had their hands on their swords, then he leapt into the shallow water, raising his sword. Something flashed in the water, and the man gasped. Tilley stood transfixed as the rain finally stopped. His shrivelled body fell into the river. He was dead. The politician screamed.

“Gwendolen! You’ve sucked the juice out of him,” Hal said.

Gwendolen flipped over, sending Hal and the six remaining passengers into the water. Opening a huge set of wings, she rose over their heads—her body was almost the size of the coracle that now floated down the river.

“It’s a monster!” Pease screamed. As Gwendolen circled above them buzzing loudly, the politician stood on the beach with dripping clothes and pointed a shaky hand at Hal. “Take him!”

The guards walked towards him, and more were coming from Lyme Pale.

Hal backed into the river. “Gwendolen!” She dived, scooping him up in two of her legs, and they flew over the river together. The giant water boatman landed in the water, her shiny golden body glistening as the sun came out. She flipped over, seeming to disappear as she swam upside down beneath the surface. Hal pulled himself onto her belly.

“You must face justice!” Pease shouted.

Hal understood their justice. He sat cross-legged on the giant water boatman's belly as she paddled with all six legs down the Silver River.

The Boatmen is a story that I originally wrote for the Fantasy Faction monthly writing contest. It came second. I've tweaked the ending a bit, but otherwise it's the same. The story has also been reprinted in the speculative fiction magazine Metastellar.