Tarot as Inspiration for Writing

Inspiration for writing stories comes in many ways, and one of these is from the beautiful and meaningful images of the tarot. It doesn’t matter whether you believe in tarot reading or not, the images are enough to stimulate the imagination.

The inspiration for writing may be literal or metaphorical. Some writers use the cards to tell a story, and I’ve played with this for some of my unpublished short stories, but sometimes the images themselves stimulate ideas for scenes in the stories.

The tarot features at the beginning of Blue Prometheus, when Lucy, working as an intuitive tarot reader in Clapton Pond in London, is giving a tarot reading class. Thomas, her friend, finds himself reluctantly dragged along. 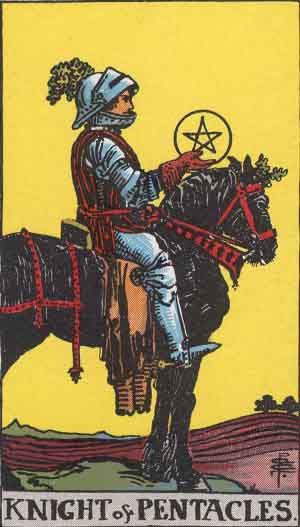 Original Rider-Waite-Smith Knight of Pentacles. As I imagined Thomas at the beginning of the journey—a hesitant knight.

The reading she gives Thomas turns out to be portentous. The Knight of Pentacles represented Thomas at the beginning of his journey—reluctant to move forward; the Devil showed his attachment to the material, and his difficulty in letting go his beliefs; the Magician literally showed what he had to become; and Death, the final card, showed literal death, but more importantly, the ending of his rejection of the magical, and a new beginning, when he finally came to believe in the magic that could save his life.

Some writers like to use the Enneagram, or other psychological methods of describing personality, for developing characters.

I like to use tarot as inspiration for writing characters by assigning individual tarot cards for each character. Tarot is one of the methods I use—but not the sole method.

Even with a system as rich as tarot, it would restrict characters too much to rely on any one system to define them, but it can be a useful starting point.

Inspiration for Writing The Darkling Odyssey 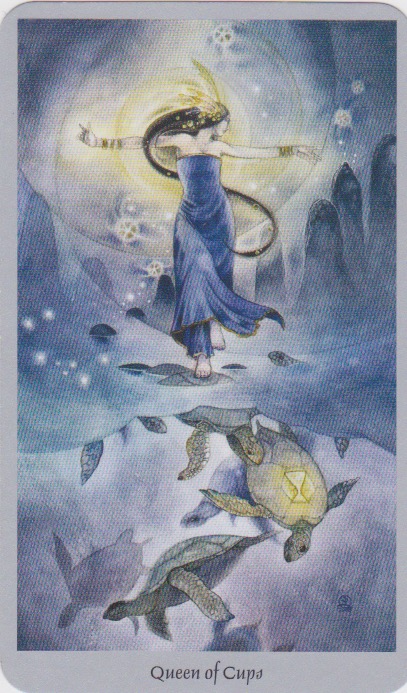 The Queen of Cups—Shadowscapes Tarot

At the end of The Darkling Odyssey, the main characters, Lucy and Thomas, find themselves facing severe tests. Three scenes from these tests were inspired by tarot cards. In these cases, it was the Shadowscapes Tarot (by Stephanie Pui-Man Law and Barbara Moore) that inspired the scenes.

The Queen of Cups (in any tarot deck) is Lucy’s card. This card, along with the Moon and the High Priestess, represents a depth of intuition and connection with the spiritual side of life, that Lucy, despite not fully recognizing it in herself, is a master.

She walks in a web of connection with nature, and is never an observer, but a part of the world she moves through. In one part of the tests, she faces great danger, and on the advice of a large bird, she calls the Turtles of Green—inspired by this tarot card.

Here is a very short extract from The Darkling Odyssey, just giving a taste. If I say too much, I'd be giving a spoiler.

She leapt onto the turtle’s back, skipping from turtle to turtle as if they were giant blue stepping stones. After each step, the turtles swam ahead, forming a moving path across the river.

Lucy is in the inner sun; a strange energetic world that responds to the thoughts of those within it. Needing time alone, she finds a quiet place. 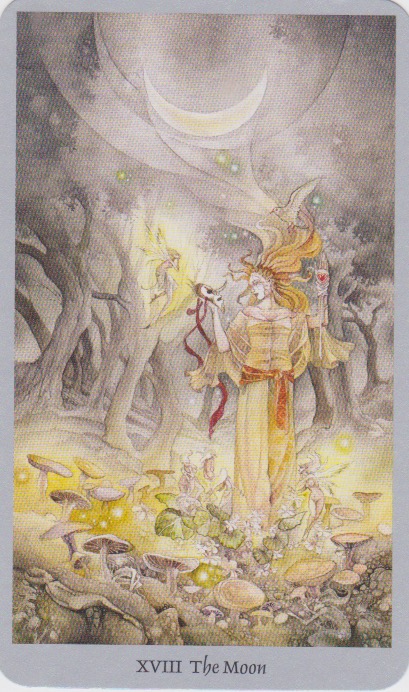 Here is a short extract:

Lucy walked through the forest and spoke to the plants and trees. When they did answer, they were harder to understand and their life more intense than the life of plants on the surface. A single bush burnt on the edge of the glade; the rest of the forest was dark. A whispering from behind her made her freeze. A trail of white mushrooms grew along the path she’d walked; more grew around her feet. Although the branches that curved above her were dark and grey, the mushrooms were bathed in golden light…

Small bright creatures moved around by her feet. They appeared to be tending the forest; she watched the tiny creatures flit about, and then she noticed a shadow move within the trees. She knew her test would be about more than truth.

Inspiration for Writing—Eight of Swords

This time, it was Thomas who was trapped in the inner sun—trapped as much by his mind as by a goblin sorcerer… 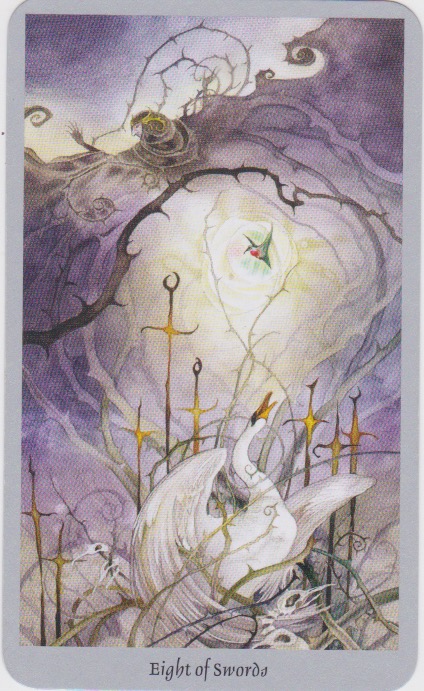 He stood alone inside his radiant cage…

He pushed his hands between the shining blades of light, but when he touched one of them, intense pain made him pull away…

A flash of light made him look up. A tiny bird hovered above his cage. He knew that in seconds it would disappear, like most things in this world. Again he doubted his hopes that Aina could still be alive. After all, he’d seen her die. But again the colourful bird caught his eye. He watched it, becoming mesmerised by its bright colours.

There are many more ways in which tarot provides inspiration for writing stories, and the tarot is just one way of stimulating the imagination and creativity—but it’s a fun way.