The Types of Fantasy I Read & Write

I read and write several types of fantasy, and some science fiction, and while my creative self doesn't like labels, the reader in me likes them because they help me explore new worlds. So here goes...

Here, I want to write about the types of fantasy I read and write, and give some examples of books I've loved reading... 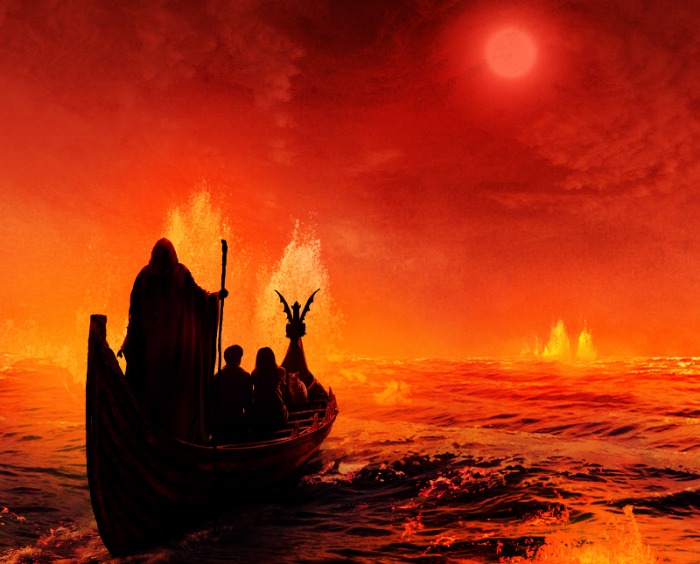 The Darkling Odyssey is a portal-quest, where the heroes travel from the familiar—a dark underground prison—to a magical inner world.

I taught creative writing at a university in Taiwan, and I almost taught a course on fantasy literature. The course was cancelled at the last minute, but as I prepared for it, I read several academic books on fantasy, which gave me quite a different perspective.

One of these books was Rhetorics of Fantasy by Farah Mendlesohn. Her likes and dislikes are different from mine, but I was interested when she divided fantasy into four categories: portal-quest, intrusive, immersive, and liminal.

This is one of my favourite types of fantasy. I love being taken from a familiar world into an exotic and magical world, riding along with the heroes, and experiencing adventures with them.

In some portal fantasies you literally step through a door into a another world. Some, like The Lord of the Rings, you begin in a familiar place, and then travel into a magical world.

Blue Prometheus is a portal-quest fantasy. It starts in London and then transports you to a distant planet.

This is when something threatening finds its way from another world into ours.

Orange Storm is an intrusive fantasy. Aliens from another universe enter our world and begin to manipulate the fabric of the universe.

I sometimes write and occasionally read liminal fantasy. In Farah Mendlesohn's words: “In the liminal fantasy, the magic hovers in the corner of our eye.”

Liminal fantasy is something I've experimented with in short stories, which is where it's mostly found. Often, this writing tends to be more literary.

Immersive fantasy is when the whole world is magical—there is no escape from it. Everyone accepts the magic as normal. It's the type of fantasy where wizard schools, and witches flying in the sky, are normal.

For me, immersive fantasy takes away the mystery, which is the intention with this type of writing.

Another way of looking at fantasy stories is through the subgenre. And although I’ll try most things, I keep returning to the following types of fantasy:

I imagine everyone here is familiar with epic fantasy, which deals with large scale mythical tales, often with intricate world building; contemporary/urban fantasy set in the modern world; and science fantasy, which includes some science fiction elements. There's one type of science fantasy I don't write—the type that attempts to explain magic scientifically.

Planetary romance, or sword and planet, are stories that involve travel to, and adventures on, alien planets.

My first series mixes many of these genres. My second series is urban fantasy suspense with some science fiction elements.

The Books I Love

I’ve always loved stories that took me to other worlds, whether fantasy, science fiction, or others. One of the first novels I read was Wind in the Willows. I was very young, but I still love the combination of nature and fantasy—as is obvious if you read my first series.

As a child, I read whenever I could—even when I wasn’t allowed to.

I really fell in love with fantasy when I read The Lion, the Witch, and the Wardrobe. It’s a classic portal-quest fantasy, and one I reread many times as a child.

Later, I explored ancient and old literature with fantastical elements. Some of them include The Odyssey; William Blake’s poems; and John Milton’s Paradise Lost, which reads like a fantasy. Yes, I know it was never conceived of in that way. Some of the characters in The Darkling Odyssey take their names from characters in this poem.

As a teenager; I read JRR Tolkien; Michael Moorcock’s Eternal Champion series; followed by the Shannara series by Terry Brooks; Magician, and the Empire Trilogy, by Raymond E. Feist (and Janny Wurts); and a lot more.

I also enjoy adventures in space—anything where the story and characters are more important than the technology. Lois McMaster Bujold’s Vorkosigan series is still one of my favourites—probably even more than her fantasy. That's the power of fascinating characters.