Aina and her father are pursued deep into the ancient forest by a deadly enemy. To her father’s concern, the forest speaks to his daughter, awakening a natural magic within her. Will Aina’s magic awaken in time to save the lives of both her and her father?

Young Aina is a novelette set in the ancient forest of the planet of Prometheus about seven years before the events of Blue Prometheus take place.

In the trilogy, Aina serves a guide for Thomas and Lucy when they arrive on the planet. She possesses special abilities, including the ability to speak to animals and plants, and the ability to use natural magic.

In Young Aina, you see how this magic is awakened, as well as seeing a formative experience in her young life, one that affects her forever.

My father said that animals thought in images and emotions, so I tried to show her an image of my house. She looked up at me, and then she tried to reach leaves in the tree above. I pulled down a branch to help her. I became lost in my thoughts and somehow thought about my father’s story about the people wanting to take our land. The deer pushed her head against my chest, and I realised that I’d been angry. Had the deer known? Were emotions a stronger way to communicate?

It also introduces her connection to nature through her love of the ancient forest that served as a haven for her for so long, and that during the trilogy was where she could find allies in her fight against the empire.

I wasn’t worried about animals; it was the humans who frightened me. Flowers lit as we approached and turned off as we walked past them. I think they were greeting us. But I was worried they’d give us away, and I asked them to turn off. Suddenly the forest went dark.

I’ve written several stories about Aina’s young life in the ancient forest, but have only published two: Young Aina and The Huntress of Prometheus.

About The Huntress of Prometheus

Huntress (a longish short story) shows another important event in her life, and takes place about three or four years after the events of Young Aina. 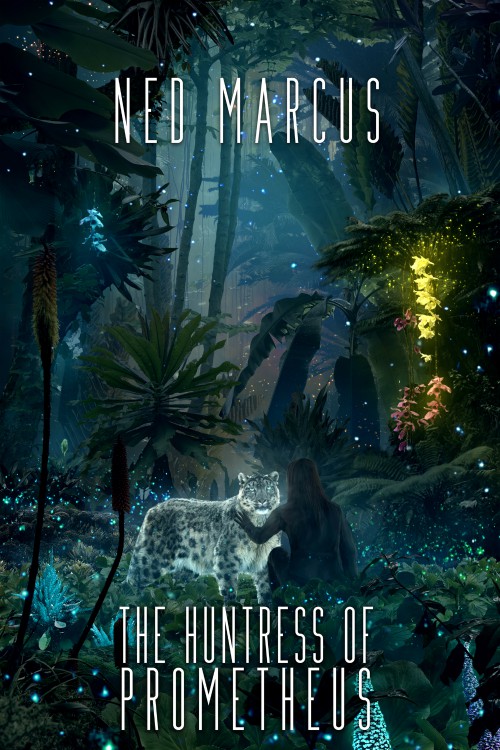 Aina encounters an imperial hunting party in the ancient forest. The party of lords and ladies are hunting a juvenile roc, one of the intelligent species  of Prometheus. Angered, she attempts to help it.

The following quote shows how much she’s become connected to the forest.

Around me, the forest darkened. The forest was not welcoming to strangers, and I was a part of that forest; I loosened my bow and quiver of arrows and waited.

Both prequels are written in first person (unlike the novels, which are written in third person) because I wanted to take readers directly into the mind of Aina as she was growing up.

Inspiration for the Ancient Forest

Sometimes people compare the forest world of the Blue Prometheus series with that of Avatar. And it’s true that they’re similar in some ways.

Actually, I was disappointed when Avatar was released (I love the film) because I was just finishing my first novel at the time, and I immediately recognised the forest world of Pandora as similar to the ancient forest of Prometheus—of course, the story is different.

I think the reason is that the influences for the film and my stories were similar.

I was inspired by many old science fiction and fantasy worlds. Jules Verne’s Journey to the Centre of the Earth, with the incredible forests found deep within the planet was one of those influences.

Another influence the forests I’ve lived near or visited during my life, and the many botanical gardens I’ve visited around the world.

Where You Can Read Them

There’s no physical version yet, although if I decide to publish more short stories set in this world, I may create one.

Young Aina is also available if you sign-up to my newsletter.

The Huntress of Prometheus is ONLY available when you sign-up to my newsletter.